In a year where Hollywood has struggled to rise above mediocrity, Black Mirror’s San Junipero is a shining beacon of what exceptional filmmaking looks like.

From the official synopsis – In a seaside town in 1987, a shy young woman and an outgoing party girl strike up a powerful bond that seems to defy the laws of space and time.

This isn’t a review, as much as it is a public service announcement telling anyone who reads this that San Junipero is something you need to watch – even if the dystopian negativity of Black Mirror isn’t your cup of tea.

In many ways San Junipero is the opposite to the prototypical episode of Black Mirror. Sure, it has an extremely clever twist, and it explores a range of different topics including; religion, acceptance, love, death.  However, this isn’t a twisted dystopian tale like the rest of the series, this episode’s outlook is hopeful and its exploration of technology is rather benign. It causes the episodes to stick out like a nice counterbalance when surrounded by the rest of the series.  It also has an awesome 80s soundtrack…. What is not to like?!? 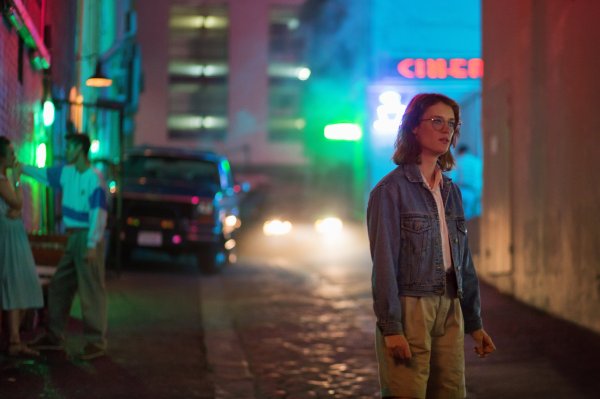 While the themes explored are plentiful, they are explored subtlety and the episode never loses focus on its key component – the incredibly powerful love story between Mackenzie Davis’s Yorkie & Gugu Mbatha Raw’s Kelly.  The chemistry between the leading ladies is strong, and depth of emotion they reach in some of the later scenes is exceptionally harrowing.

Also, credit must go to Black Mirror’s creator Charlie Brooker who wrote the episode, and the episode’s director, Owen Harris. Charlie Brooker never lets his script get bogged down in details, allowing the emotion and the themes to provide the narrative thrust of the story.  Owen Harris knows when to sit back and allow the actors to control the screen, and his decision to shoot the episode in full widescreen scope (2:35:1), gives the episode a cinematic feel.

While watching the episode all I could think about is how I wish they would have decided to add 20 minutes to the run time and released it theatrically. This way – it could find a wider audience, and get the recognition it thoroughly deserves. I really don’t think it would have been too difficult. The episode is beautifully photographed, it has award worthy performances, and thematically it is much more interesting than any movie released into theaters this summer.

There is so much more I want to say, but if I said anything else I would risk spoiling too much of the story.  All you need to know is that it a powerful story that explores many interesting themes, and is anchored by two exceptional performances from its leading ladies. Nick says: “MUST WATCH”.

I have an unhealthy obsession with lists, so I thought I would leave you with a list.

These are the Black Mirror season 3 episodes ranked from worst to best.

Celebrate your love of film.

Home to: The Movie Mingle - A weekly podcast that discusses everything in the world of cinema. A Cast of Ice and Fire - A weekly look at HBO's 'Game of Thrones'